Japanese Netflix is chock-full of anime and even more Japanese shows, but you can only normally access it while in Japan. If you want to enjoy Japan’s catalog while in another country, you’ll need a fast and reliable VPN that can get past Netflix’s geo-restrictions. Only the best and biggest VPNs have so far been able to do so, and only a few have enough servers in Japan to support the growing audience enjoying Japan’s Netflix library. So here are our top picks for best VPN for Japanese Netflix in 2020: NordVPN, CyberGhost VPN, ExpressVPN, PureVPN, and IPVanish.

Secure and fast VPN with the most servers in Japan 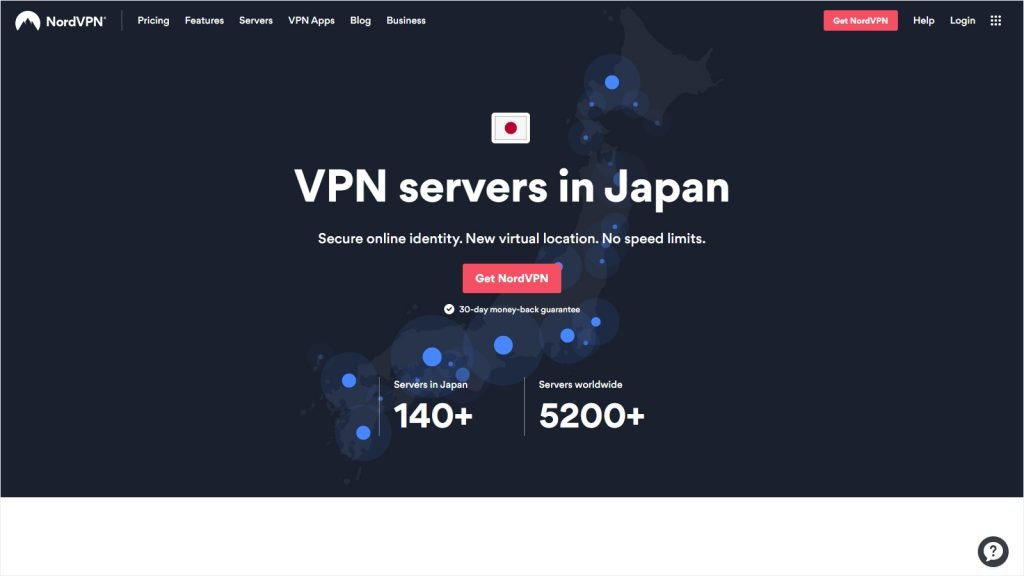 As one of the largest VPN providers in the globe, NordVPN has recognized the increasing demand for servers in Japan. They’ve set up a whopping 140 servers in the country, with more on the way. This makes NordVPN a clear choice if you want to access Japanese Netflix, since you won’t be fighting for server attention. Their Quick Connect feature uses an algorithm to automatically connect you to the fastest VPN server based on your target location.

What brings NordVPN to the top of our list is its combination of enhanced security features and fast, stable connections. They use banking-grade encryption to protect online activities from prying eyes, along with DNS leak protection, ad and malware blockers, and a kill switch for contingency. Moreover, NordVPN has specialty servers, such as P2P, Double VPN, and Onion over VPN, for even better security and performance.

Aside from Netflix, NordVPN will also unlock other streaming services such as Hulu, HBO, Showtime, etc. You can connect up to six devices at a time, and they can range from Windows and Mac laptops, iPhones and Android smartphones, and even smart TVs and gaming consoles. You can try out NordVPN’s services fully for 30 days, and you get a full refund if you’re not satisfied. It has one of the most affordable pricing among VPNs in this list, so it’s pretty difficult not to feel like you’re getting your money’s worth. 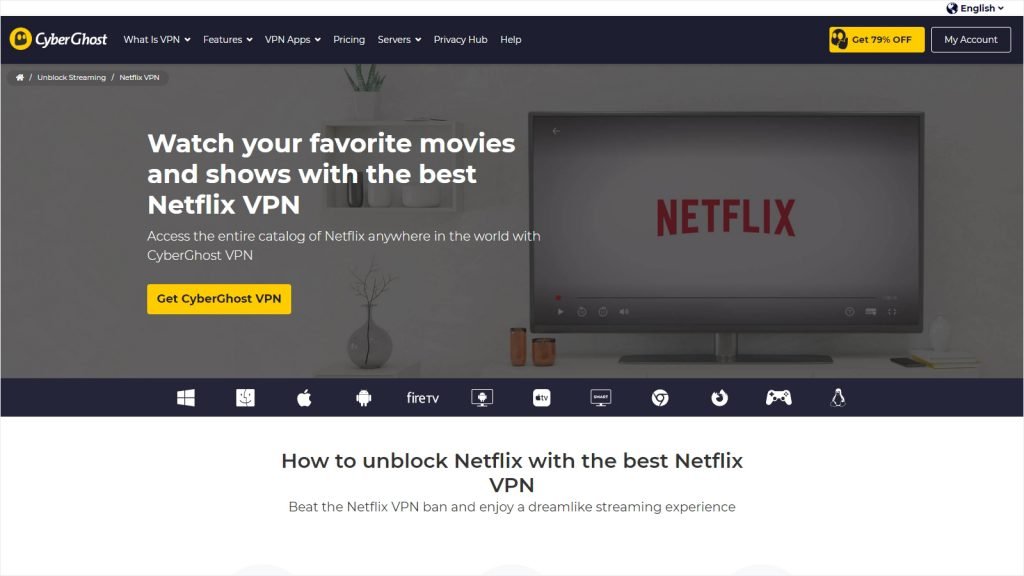 Currently, CyberGhost VPN holds the title of the largest VPN provider, with more than 6,500 servers located in 90 countries. 92 of those servers are located in Japan, making it the second biggest VPN service to consider for access to restricted Japanese content. Even better, CyberGhost has optimized some of them specifically for streaming Netflix, letting you enjoy buffer-free connections.

As you can expect, CyberGhost has topnotch security features including 256-bit traffic encryption, malware protection, and strict no logs policy. It’s headquartered in Romania where there are no mandatory data retention laws, so you can be reassured that your data is safe. CyberGhost VPN also ensures blazing fast connections with unlimited bandwidth so you can stream to your heart’s content.

You can get up to 7 devices connected to CyberGhost servers simultaneously. They have apps for desktop and laptop PCs, smartphones, consoles, routers, and smart TVs, so you can equip everything at home with VPN privacy and access. In addition, CyberGhost VPN has the best promo pricing in this list, letting you save a bucketload for long-term subscriptions. 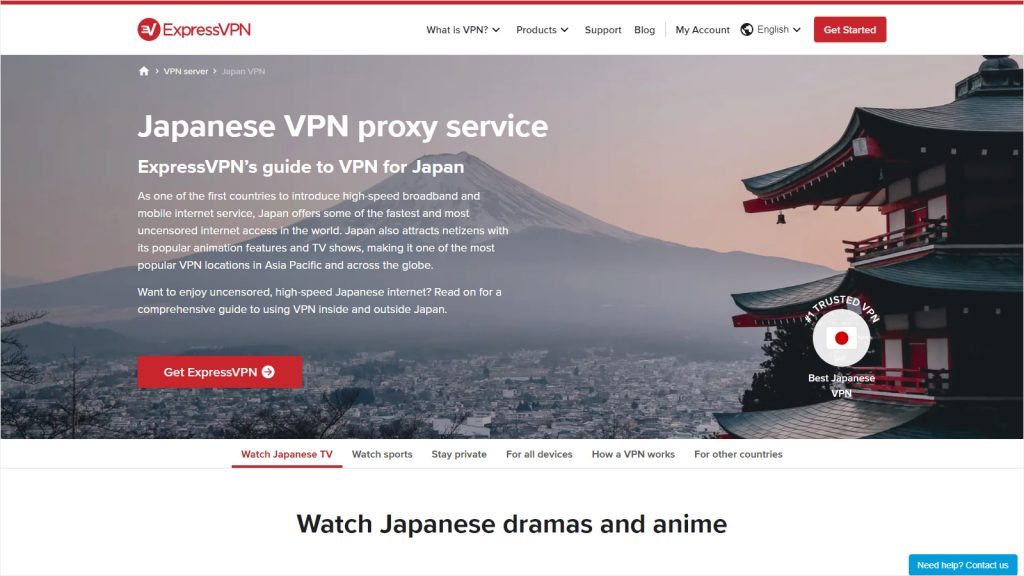 Despite having only a handful of servers located in Japan, ExpressVPN delivers ultra-fast connections for seamless streaming experiences. It remains one of the VPN services that can reliably get past Netflix restrictions based on location, and it has applied those skills on BBC iPlayer, Hulu, Disney+, Amazon Prime Video, and other streaming services.

You can expect the best online privacy and security from ExpressVPN, with government-level encryption, kill switch, leak protection, and multiple security protocols. They also have one of the most comprehensive app selections for a variety of devices, though you can only connect up to 5 at once. As it’s the most expensive VPN here, we really only recommend ExpressVPN is speed is your top priority.

Sure and secure Netflix VPN for Japan 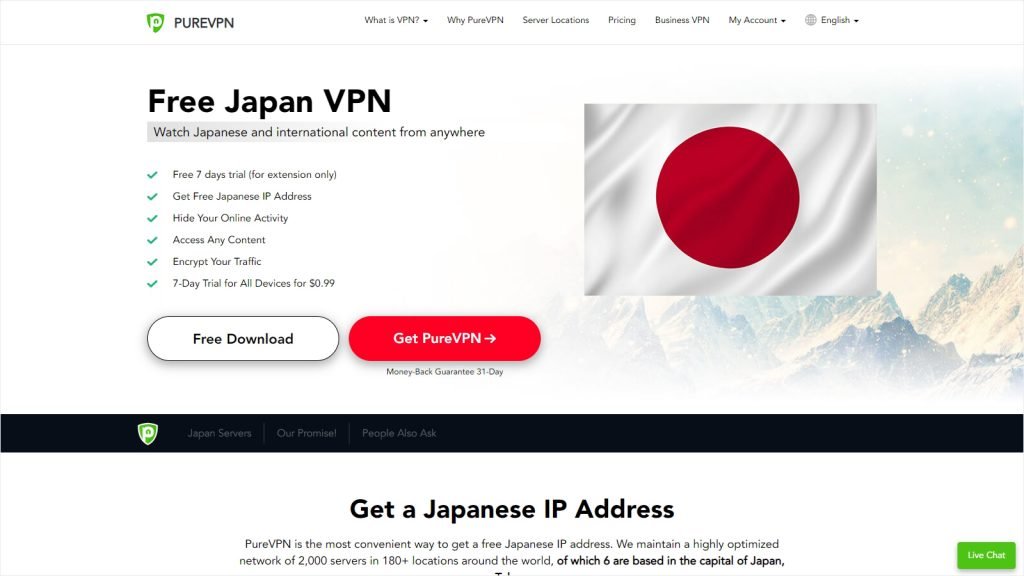 Unlike most premium VPNs, PureVPN is the only one to offer a 7-day trial for $1 that lets you try it out and see for yourself whether it can get the job done. It’s an even better risk-free method of testing VPNs and you can now connect up to 10 devices, increased from the previous max of 5. Plus, subscribers can gift 12 free monthly accounts to friends and family, letting them have a taste of PureVPN, too.

As you can see, PureVPN has provided some special attention to its Japan servers. You’ll be able to access content on Netflix, Amazon Prime, and more streaming services in the country. PureVPN’s security is topnotch, providing you an anonymous Japanese IP address with 256-bit encryption for all your online traffic. You can stream as much as you want, since PureVPN hides your sessions from your ISP, preventing any bandwidth throttling that can result from high consumption. 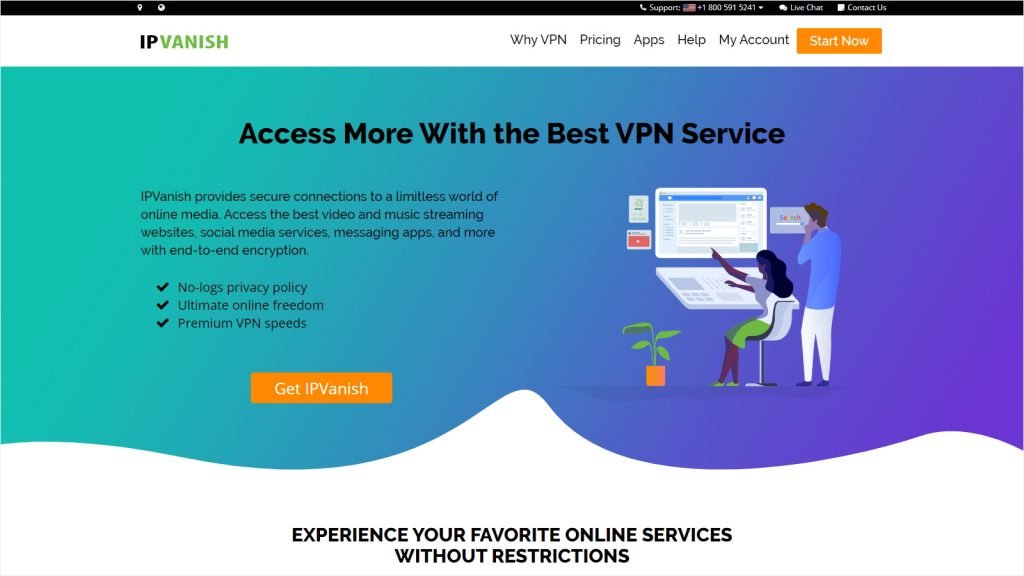 Though it’s not very vocal about its Netflix unblocking powers, IPVanish remains one of the most reliable VPN services for streaming content from other regions. You’ll be able to access online services without restrictions based on your IP address, Netflix included. IPVanish currently has six servers in Japan allowing you a way in to get to their awesome Netflix library and other entertainment streams besides.

Out of this list, IPVanish has the fewest servers and devices supported, making them ideal only if privacy is your big concern and you’re primarily connecting via Windows, macOS, iOS, Android, Linux, or router firmware. Still, you can have up to 10 devices connected at any time, and you can rely on 24/7 customer support to help you find the best servers for what you’re doing.

NordVPN and CyberGhost VPN are our top two best VPNs for Japanese Netflix.

Most reliable VPN for streaming Netflix

In terms of sheer accessibility and speed, NordVPN provides the most comprehensive VPN coverage for those looking to stream Japan’s Netflix catalog. You get access to more servers in Japan than any other provider, and connections are fast, stable, and secure. It’s also got one of the best promo pricing for multi-year subscriptions, saving you a lot of money for an already fantastic service.

However, if you’re really looking to spend the least amount while still getting amazing VPN connections, CyberGhost VPN will deliver. It’s the biggest VPN provider and one of the oldest, too, so you can rely on their privacy features, fast connections, and user-friendly interface.